We're working a lot with Adaptive Cards at Digital Assistant, and we're frequently find new features that even Microsoft isn't reporting about in their blog. So we've had an internal wiki page that lists all the different versions, and possibly upcoming features, that we shared in the team. Now we thought, why not share it with you, too. This is our ultimate roundup of Adaptive Cards' version history, future features and list of the main apps that support it.

The next version is going to be v1.6 and there are a whole slew of features that have been announced that may make it into this release. Let's explore them together:

Adaptive Cards are going to be the new standard for widgets in Windows 11. In order to elevate the humble Adaptive Card to a point where it can serve as logic-rich and visually handsome Widgets, there is going to be many new features added to the platform. Expect a great number of them to make into the next version of Adaptive Cards.

Already available in a v1.6 preview in the Adaptive Card Designer are carousels. These will allow users to advance array items like a slideshow. Items can be a container with text and other elements, or just plain images. Interestingly, the pagination can be either vertically or horizontally adding a bit more visual interest to future Adaptive Card designs.

Even though the lack of responsive design media queries were an often complained about oversight with Adaptive Cards, things could be about to change. For Windows 11 they're rolling in 3 different widget heights, and Adaptive Cards will probably gain a way to toggle what kind of content should be displayed based on the selected height.

Related: Things you need to consider when building with Adaptive Cards

Loop is a new cross-document content type. It's basically anything like a table, list or text – but as portable and embeddable as a YouTube video snippet. It has been announced that Adaptive Cards will become a new type of Loop component, possibly opening up new possibilities to embed Adaptive Cards into documents or share them in collaborative settings like Teams group chats.

A new approach to Microsoft Search has been in development since 2021, with SharePoint slated to gain search results made with Adaptive Cards, as well as new Search apps that show Google-esque widgets above search results. A new render preview in the Adaptive Card designer has been spotted in August 2022, but a recent waitlist for a private preview has been pulled with a user's comment being left unanswered. Could therefore be some way off still, despite SharePoint search being a bugbear for many...

The latest release is v1.5 which came out in October '21. It adds a number of new features that improve Cards' accessibility, for example tooltips for Actions.

Action sets with too many buttons now wrap into a dropdown menu to minimize their use of space. Another new feature are Tables which previously could only be crudely constructed out of multiple column sets.

Which platform supports which version?

Adaptive Cards is only supported by a handful of hosts, all bar one are made by Microsoft itself. Yet there is a degree of fragmentation between platforms in terms of their supported version. Something you should be aware of if designing new Adaptive Cards you're planning to be truly cross-platform.

Being the only mainstream non-Microsoft product that supports Adaptive Cards, Webex supports only v1.2, with no current plans to upgrade. It should be noted that even within v1.2 Webex does not support Media, speak or Action.ToggleVisibility.

Since August 2021, Teams is on v1.4 which means some features from future versions, like tables or tooltips, are not yet supported. There is no timeline for when Teams might upgrade to a newer release.

Bot Framework currently supports v1.4 with no plans announced for an upgrade yet.

Attaching interactive Cards and buttons to emails has been planned since the very beginning of Adaptive Cards. Although extensively used for internal Viva emails, Outlook Actionable Messages are not open to developers and officially remain all the way down on v1.0 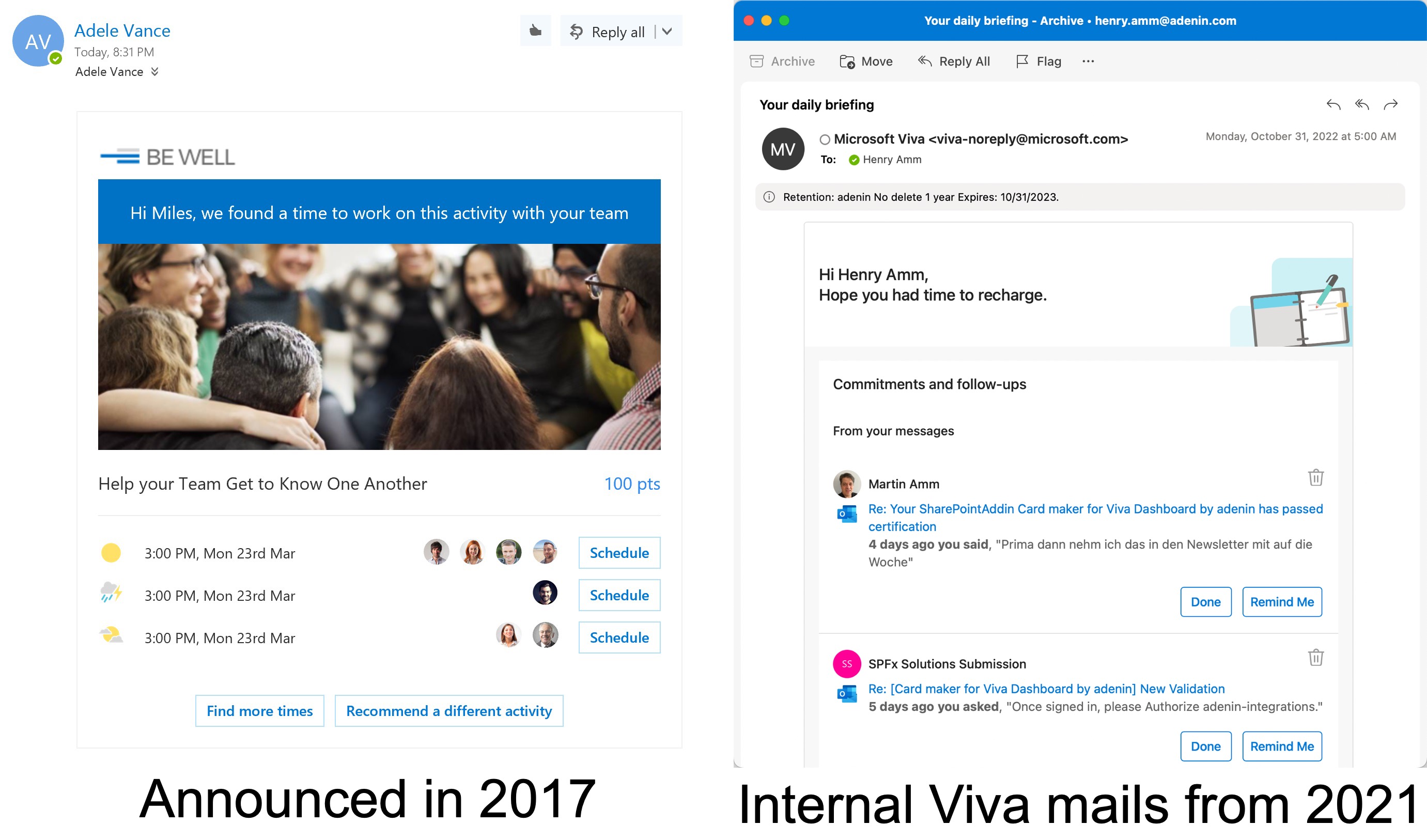 Celebrating over five years of features and additions, here we have summarized briefly the major milestones achieved with each version.

This version was released in April '21, and it add mostly more reliability to Adaptive Cards with the only new feature being Action.Execute. Though, small in new features it is one of the most widely supported versions still at the day of writing.

Released in August 2020, this version included a lot of bug fixes and focused on improving Adaptive Card's ability to handle forms, such as adding validation and input labels.

v1.3 was also a major dot release that introduced Templating, Adaptive Cards' way to dynamically incorporate data from an API's response into the Card's schema.

This came out in June 2019 and included mostly just under the hood bug fixes and improvements to platform-specific renderers. One of those is fallback support, which makes renderers skip future features that the current host doesn't yet support. Really new features are for example the ability to toggle the visibility of elements, allowing cool accordion style expanding/collapsing sections.

Buttons can now be positive or negative, effectively allowing for designs with a primary button or an extra sign an action is destructive.

This version was introduced in September 2018, adding chiefly a Media element to display videos, along with the ability to add icons to Actions buttons and explicit image sizes. Full release notes →

Introduced at Build in May 2017, Adaptive Card were incepted to be a schema-based recipe for Cards that only defines them, but leaves the styling up to the respective host app. Version 1.0 was officially released out of beta in March 2018.

Apart from Skype being pitched as an early adopter (even though that later never came to fruition), it was mostly geared towards developers wanting to enhance their chatbots made with Bot Framework.

A point of note was that Adaptive Cards supported voice output from the start, a nod to the advent of smart voice assistants like Cortana or Alexa. Another notable plan was the idea to make static emails more interactive by enhancing them with Adaptive Cards that can buttons the user could use to, say, approve a request.