ELI5: Ambient Computing in the enterprise

Although first incepted in the 1990s, ambient intelligence has seen a recent resurgence in popularity thanks to a widespread adoption of IoT features in devices.

In a nutshell, people speak of ambient computing when they mean devices around you work together to sense and respond to your presence or needs. It's like a ‘digital mesh’ where each device is part of a seamless, underlying web of connections that allow free flow of data.

Especially in the context of work, it's a 'behind the scenes' feature that lets nearby devices proactively present information or suggest actions in anticipation of the user's needs.

Examples for Ambient Computing in the workplace

Cisco Webex apps can use your device's microphone to detect ultrasound waves emitted by meeting room hardware (such as a conference phone). This allows users to seamlessly join a meeting with their device in-hand, with the audio + video coming from the meeting room equipment itself. 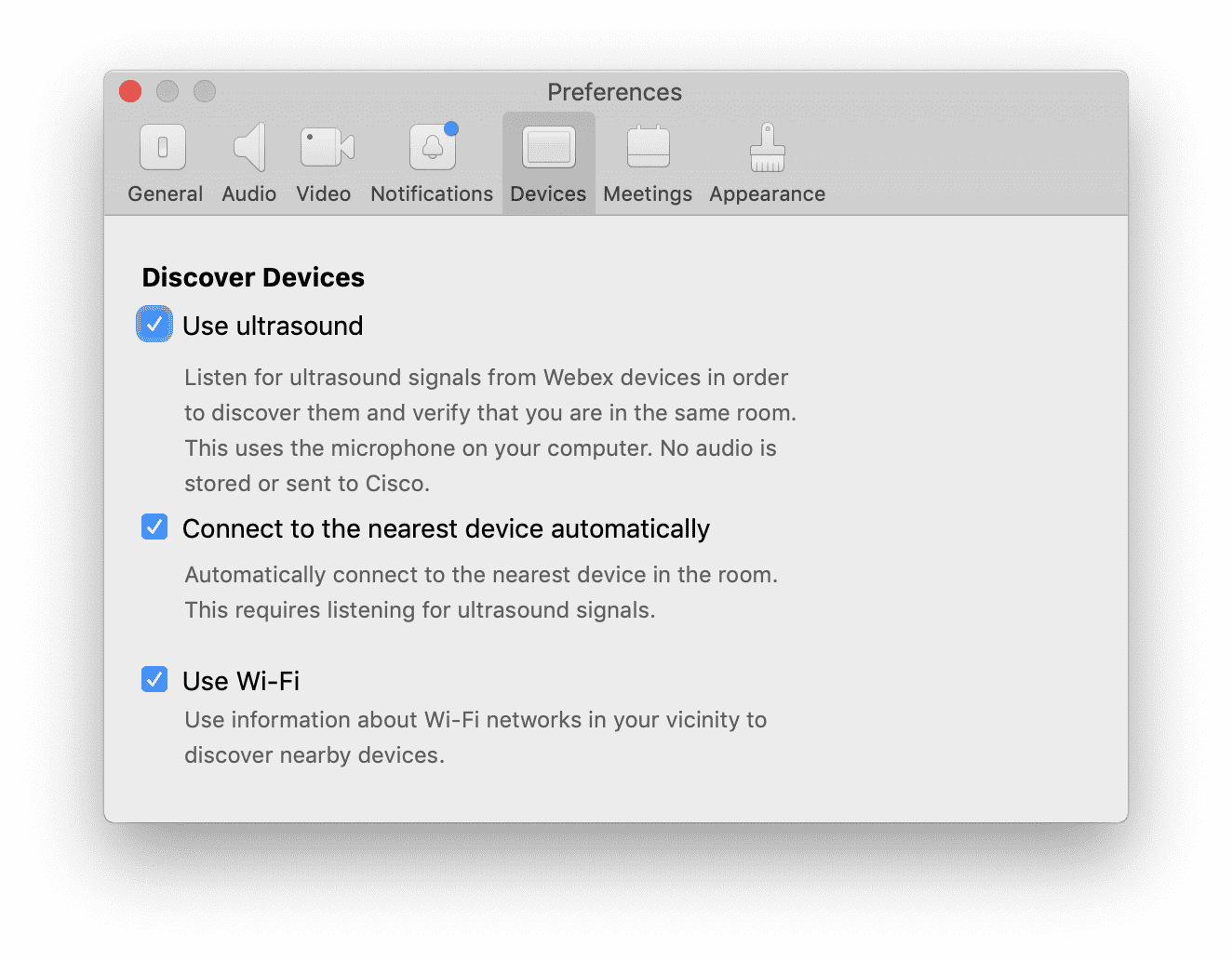 Partly due to the advancement of IoT, much an office building's services can now be controlled via central "bus" systems or even have their TCP/IP address. With the support of sensors and software, buildings can sense things like occupancy, weather, ambient light and react in turn by managing their own internal light or air conditioning.

For example, office buildings with state of the art LED lighting systems can make work both more comfortable for employees whilst reducing the carbon footprint of the building.

Alexa uses a mechanism called 'Spacial Perception' through which multiple Echo devices, that are woken up by the user saying 'Hey Alexa', quickly arbitrate amongst themselves who should respond.

Not only that, but Alexa can be set up to distinguish between different voices which completely locks out Skills or data from other users. Both these things together can feasibly allow many Echo devices to be dotted around an office and users can freely speak to any Alexa whilst getting information personalized to them (and secure from other users).

Apple's phenomenal user experience is partly enabled by their commitment to ambient computing. Take Handoff for example, that would allow an employee to start an email on one device and seamlessly pick it up on the larger screen once they arrive at their desk.

Handoff of a website between an iOS and Mac device

This features is based on your proximity to your other devices which is detected via Wifi and Bluetooth. Many apps support Handoff, so you could also quickly share documents, current websites or your clipboard between all your devices – thus making work simpler.

Another example could be Automation rules on iOS that allow you to trigger workflows based on your activity such as leaving for work, or getting out of the car. Such triggers could then be used to message co-workers, get a read-out of a business briefing or give commands to smart home devices. 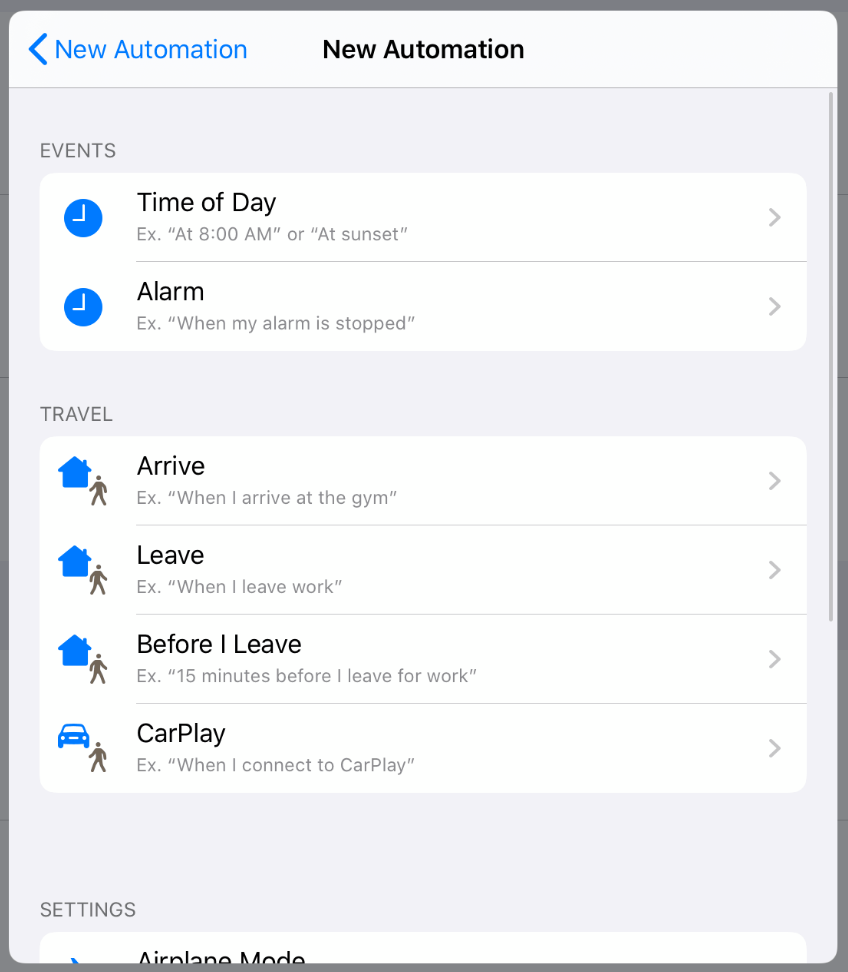 A smart assistant tool for work, which normally shows the user updates and notifications from their other apps, can also learn certain preferences overtime and proactively change settings.

For example, say you frequently search for "Open leads", then this assistant could suggest you pin that information to your persistent board of "Cards". It could also suggest you set up an out-of-office schedule when new leave got approved, or suggest content that is popular with colleagues that have a similar profile in the organization. 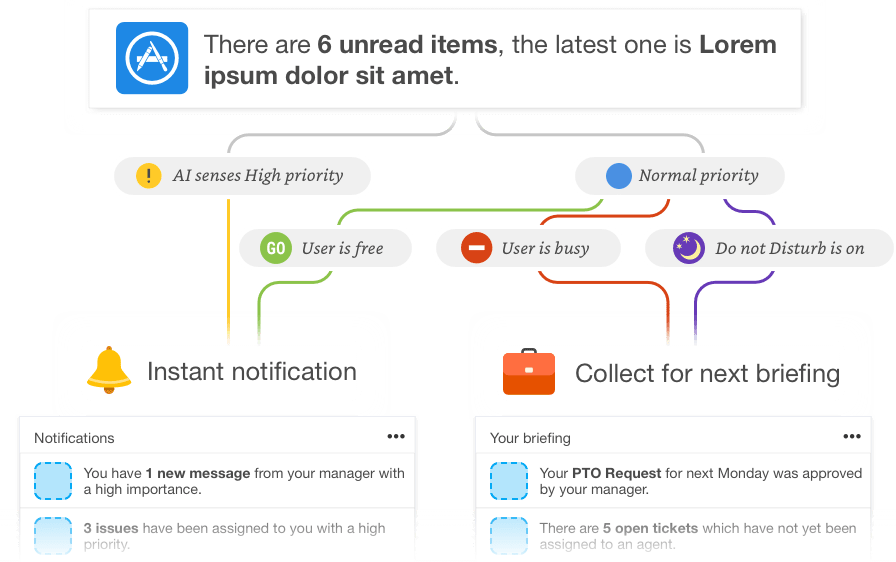 Or it could pick up that you routinely mute notifications during meetings and then, next time you have an online meeting, the smart assistant will automatically set itself to "Do not disturb" – unless what appears to be an urgent update was detected.

Ambient Computing is a concept for the Internet of Things (IoT) which encompasses sensors in everyday objects that can 'talk' to one another.

It places a strong emphasis on being personal and proactive and allowing services to become 'smarter' overtime by making guesses at what the next step is the user would request.

Such technology benefits the user by reducing their cognitive load and letting them stay more productive for longer. It also generally contributes to their workplace satisfaction by given the user the feeling that their devices help them get work done, rather than having to work "around" their quirks.