With tools that help you learn, share knowledge, maintain wellbeing, and more, Viva is the name for Microsoft's push into the employee experience space. Viva Connections, specifically, aims to be a gateway to all the other Viva services, with their more specialized UIs, and generally a hub for all kinds of relevant content for the user.

In this blog post we'll specifically talk about Viva Connections and whether it's a product you should consider deploying to your Microsoft 365.

Viva Connections consists of your Feed and your Dashboard.

The Feed is pretty self-explanatory: it's a list of relevant Yammer posts, such as documents, questions, praise, etc. which are interspersed with relevant bookmarks, such as topical Yammer groups, saved SharePoint pages, etc. It's personal to every user based on their connections, page memberships, etc. and they can sort it either based on relevance or recency.

The Dashboard consists of Cards that show users little summaries of other Viva products as well as general purpose things, like their calendars, or employee services, such as your PTO allowance. Cards come in two sizes, and clicking one can temporarily open a more detailed Card as a popover. The width of the dashboard automatically adjusts to your window size. So on a small screen or mobile, Cards arrange themselves neatly into more and more rows.

2. The Feed isn't very interesting (yet)

At first glance, the Feed seems like a more interesting proposition being personalized for each user. This makes it just one of three Microsoft 365 products that show aggregated content for each user, the others being Yammer and Delve.

However it only comes as a standalone tab on the mobile version of the Viva Connections Teams app. On your desktop, the Feed really is your Yammer homepage. Microsoft seem to be investigating options to rebrand at least some parts of Yammer for their Viva paradigm.

It also offers no options to customize sources, sort orders, etc. on an organizational level – meaning it's pretty much a take it, or have it anyway, feature.

During this year's Ignite conference, a new Viva homepage prototype has been shown which reserves a set area of the Feed to the right. This means the Feed will be available on the desktop, too. They also announced the ability to boost certain posts giving organizations some control over what content gets seen. 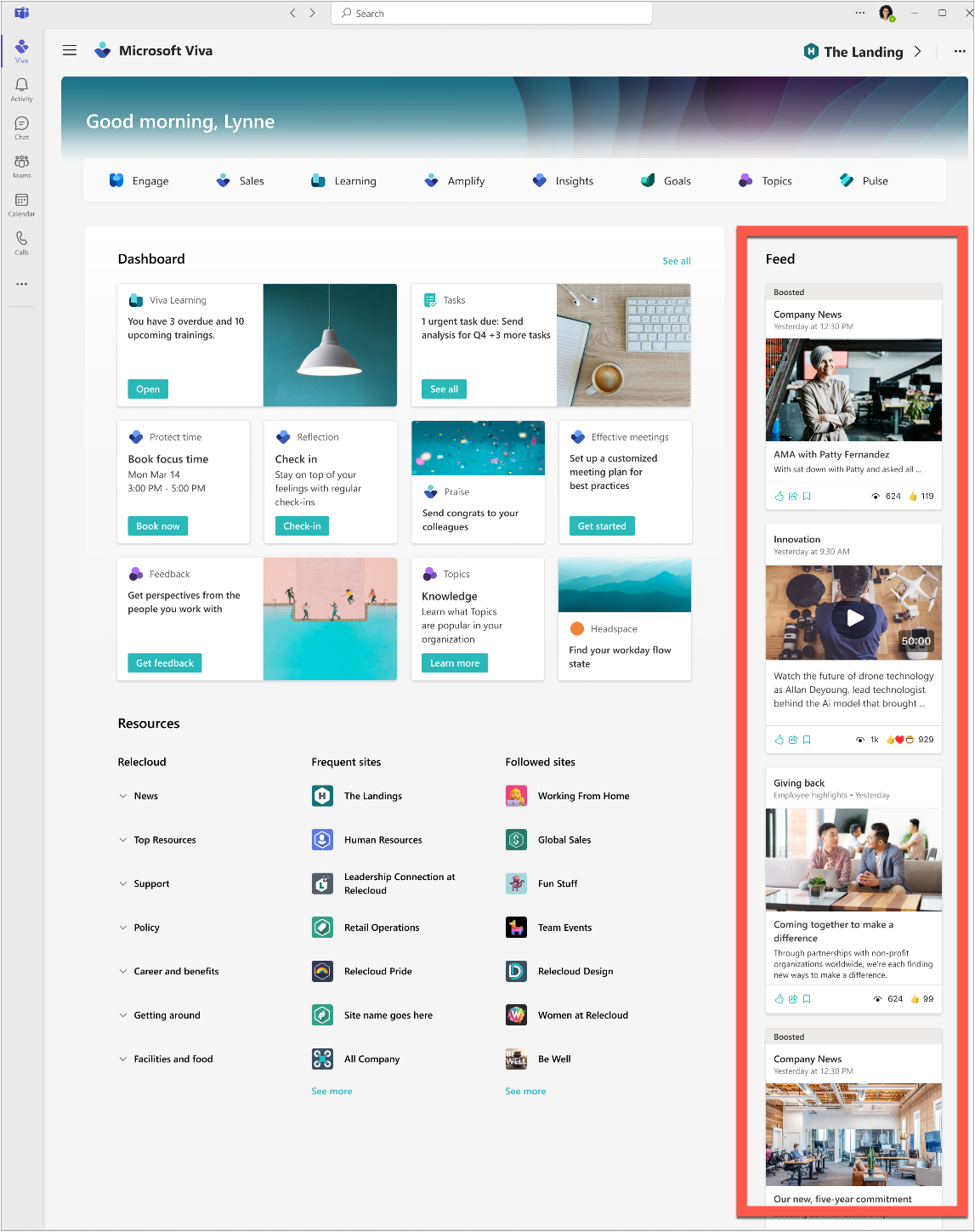 It's actually the Dashboard that has far more potential to transform your intranet. Why is that? It's a shift in paradigm. For literal decades Microsoft's intranets used web parts as the standard currency to arrange the different building blocks on your page. So you'd be forgiven for thinking this dashboard uses SharePoint's familiar web parts, too. But – oh blimey – it's not. 😱

Viva Connections' dashboard ditched web parts in favour of Adaptive Cards, the newer Microsoft layouting UX standard that's used in Teams or (soon) Windows 12. Adaptive Cards have been around awhile and starting to show up in everything Microsoft makes: Windows 12 widgets will be using them, just like Viva or future version of Microsoft Search.

Related: Guide to Adaptive Cards for IT teams

For the Dashboard Microsoft created Adaptive Card Extensions or short ACE. Basically, this standard defines an Adaptive Card as a pair of Cards, one being a small summary (Card View) of it's bigger companion Card (Quick view).

And there are some stunning examples of the kind of seamless dashboards organizations can throw together with these new ACEs. Cards can also be targeted to different audiences, so that everyone can see a unique combination of Cards that suit their role in the organization.

4. But it has its own limitations

But before you go all in on Viva Dashboard there are some important limiting factors Microsoft makes you accept for now.

Firstly, users cannot customize their Dashboard. The Cards appear in the sort order defined by the admin, and except for audience targeting, every user will see every Card with no choice to hide or unpin certain Cards from your Dashboard.

Secondly, while the Dashboard itself shows as many Cards as you like, the web part on the Viva homepage is limiting Cards to just 20. While this sounds plenty at first, consider just how many applications your organization uses that might be vying for a spot on the dashboard. This means users might not potentially see any Cards you design beyond those first 20.

Thirdly, the dashboard doesn't refresh on it's own. It would be great if users could keep their dashboard open all-day – Mission Impossible-style – and watch live how their tasks, tickets or events change up and down. But once loaded, the dashboard stays as it is. There is no function to reload or refresh Adaptive Cards automatically, not even an indicator for the user to refresh the page themselves.

5. There are almost no add-ins

Microsoft is very big on you building your own ACEs. Why? Because there is almost no marketplace for ACE add-ins yet (see for yourself). This means if you want to show extra Cards, apart from the 8 built-in ones, you're pretty much looking at developing one yourself.

6. The Dashboard is going to become even more central

Even though as a product it's still somewhat new, it's pretty much guaranteed to become a cornerstone in Microsoft's modern intranet experience. At Ignite 2022, Microsoft announced it is adding a new homepage experience to Viva Connections. The new homepage now has set areas for your Feed and Dashboard – and no space for your own web parts.

What's interesting is that the Dashboard became bigger and sits now nearly at the top of the page, pointing to the increasing importance of it. The Viva homepage will also become an integral part Microsoft Teams – notice how the above screenshot is Microsoft Teams. Previously that was just an optional module that admins could install.

There you have it, my top tips for anyone thinking about deploying Viva Connections to their organization. Have I missed anything? Do you have tips you would like to share? Let me know in the comments below.